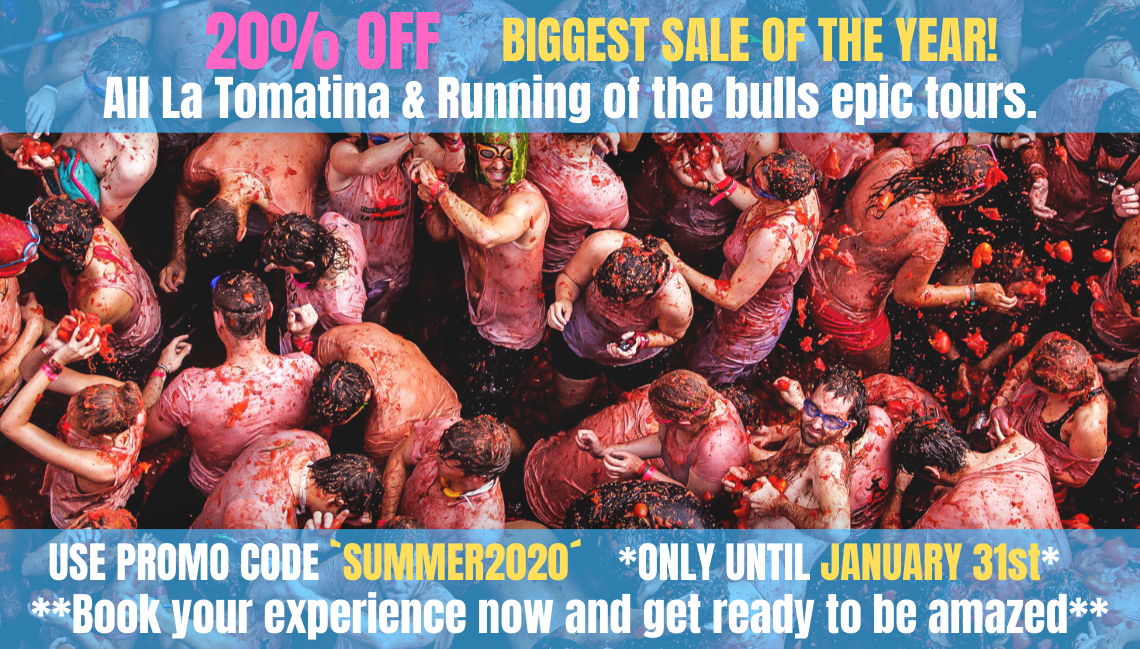 WHY FESTIVALS ALL AROUND?

We are proud to be named The Official Tour of La Tomatina!
It’s been 10 years since we started making people happy by bringing them to La Tomatina. We love this festival and put our hearts and souls into making sure all of our guests have one of the best days of their lives.
Welcome to the Festivals All Around family!

You need a ticket to participate. See ticket options

You need a ticket to participate. See ticket options

GET READY FOR THE OFFICIAL LA TOMATINA AFTER PARTY

The energy of these young people made that one participant fell off. The participant flew into a fit of rage, started to hit everything in his path. There was a market stall of vegetable that fell victim of the furious crowd: people started to pelt each other with tomatoes until the local forces ended that vegetable battle.

The following year, the young people picked a quarrel by their own decision and brought the tomatoes from home. Although the police broke up the early tradition in the following years, the young boys had made history without being conscious about it. La Tomatina was banned in the early 50s, which was not a problem for the participants who were even arrested. But the people spoke and the festivity was again allowed with more participants and more frenetic feelings.

The festivity was again cancelled till 1957 when, as a sign of protest, the tomato burial was held. It was a demonstration in which the residents carried a coffin with a huge tomato inside. The parade was accompanied by a music band which played funeral marches and it was totally successful. La Tomatina Festival was finally allowed and became an official festivity.
As a result of the report of Javier Basilio, broadcasted in the Spanish Television Program called Informe Semanal, the festivity started to be known in the rest of Spain.

Since then, the number of participants increased year after year as well as the excitement about La Tomatina Festival. In 2002, La Tomatina of Buñol was declared Festivity of International Tourist Interest by the Secretary Deparment of Tourism due to its success.

If you want to keep having a funny Tomatina Festival, you must respect these rules:

Please let us help you to make this adventure come true, give us a call and we will help you with all your needs. We can´t wait to have you with us at our Festivals All Around Family and create memories together.

Festivals all around Copyright All Rights Reserved ©2020
By using our websites you agree that we can place both essential and non-essential cookies on your device. You can block any cookies from any website through your browser settings. If you share the use of a computer, accepting or rejecting the use of cookies will affect all users of that computer.I AGREE